PepsiCo’s June 4, 2015 announcement that it will launch a new line of craft sodas, called Stubborn Soda, caught our attention. In response to growing customer demand for more natural refreshments, PepsiCo will sweeten its Stubborn Sodas with sugarcane instead of high-fructose corn syrup.

As PepsiCo and possibly other beverage companies transition to using sugarcane as an alternative to high fructose corn syrup and for bottling production, are they considering how climate variability could affect and potentially disrupt this supply chain input?

The importance of understanding the impacts of climate variability can often get lost during larger discussions of climate change, a continuous and long-term increase or decrease to average weather conditions and/or ranges of weather (e.g. more severe or frequent storms). Climate variability describes the way in which climate fluctuates yearly above or below a long-term average value. However, this variability, which is impacted by long-term climate change, will be a key driver of risks to company assets and supply chains in the 21st Century.

PepsiCo sources a majority of its sugarcane supply from Brazil, followed by Thailand and India. Brazil is the global leader and largest producer of sugarcane, accounting for roughly 60% of global trade and 25% of the world’s supply. Sao Paulo’s region, in particular, boasts approximately two-thirds of Brazil’s sugarcane production with sugar plantations and mills in the northeast supplying the remaining third (Figure 1). 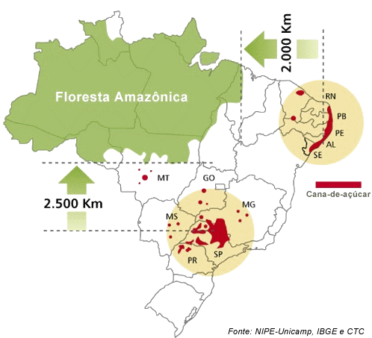 Successful sugar cane yield, production, and quality are dependent on the right combination of climatic variables. Optimal growing conditions for sugarcane exist primarily in the tropics due to the abundance of direct sunlight, rainfall, and long, warm/temperature seasons, conditions representative of Brazil’s south central and northeast. Yet, as essential as the temperature and sunlight are to the development of sugarcane, adequate and well-distributed rainfall is pivotal for the quality and quantity of sugarcane yields. Furthermore, the sustainability of sugarcane is wholly dependent on how regional climatic variables such as precipitation will vary and/or alter with climate change over time.

IPCC’s fourth and fifth assessment reports (AR4 and AR5) both project that climate change and variability will disrupt the frequency and intensity of extreme events, heat waves, floods, and droughts. Exemplary of an increase in variability –  this February was the wettest month in south central Brazil since 1995 even though the region and the whole of Brazil is still experiencing its worst drought in 80 years. Below normal rainfall has been observed during the November-May wet season for the third consecutive year and directly coincides with the sugarcane planting season in the south central region – Sao Paulo and surrounding areas have experienced 13% and 3% declines (respectively) in sugarcane production for June 2015 when compared to June 2014. Figure 2 shows the high variability in the frequency and intensity of rainfall events averaged November-May precipitation projections for South Central Brazil into 2030. The figure also illustrates the decrease in precipitation from 2012 contributing to the current drought.

PepsiCo and other sugarcane-invested beverage companies will likely take note of UNICA’s recent report estimating a significant drop in sugarcane yields for the 2014/2015 harvests caused by a drought stretching from 2012 in the south central region of Brazil (near Sao-Paulo).

PepsiCo has a history of depending on sugarcane in their operations, not only for sweetening beverages, but also for creating their bottles. Diversification of PepsiCo’s sugarcane acquisition sites or even downscaled sugarcane production in Brazil may be an effective strategy going forward. Otherwise, reactive decision-making could lead to loss of resources, time and revenue

By proactively identifying and responding to climate change risks, companies can more readily adapt to potential climate shock losses and capitalize on climate variability opportunities.  Adapt Ready seeks to help global companies do just that by uncovering a variety of physical risks and opportunities, including those associated with climate change, for short, medium and long-term decisions.

Login to adapt ready
Reset Password
Enter the username or e-mail you used in your profile. A password reset link will be sent to you by email.