Feb. 27 2016, marked the release of the 2016 Berkshire Hathaway’s shareholder letter to investors, and the highlight of the 30-page report (taking aside the performance of their funds) seems to be that Warren Buffett dismisses the idea that climate change could be a big financial risk to Berkshire Hathaway’s insurance business.

And you might, rightly, ask: how does this topic come about now? The answer is that for a number of years now, there has been a growing concern amongst Berkshire Hathaway’s shareholders regarding the company’s stand on climate change risks. So much so that a proposal has been filed by the Nebraska Peace Foundation (which owns a single Berkshire share) asking the investment firm to file a formal report on the risks climate change poses to its business.

However Berkshire (one of the world’s largest property insurers and insurers against catastrophic risks) challenges those claims, stating that insurance policies are customarily written for one year and re-priced upwards to reflect growing risks, so climate change could actually increase Berkshire’s profitability.

Firstly, one must realize that extreme weather events are happening more frequently than even before (these include long-lasting drought in the state of California, flooding of “biblical” proportions in South California, etc.). Research shows that extreme heat-waves and heavy rain-storms that previously only occurred once every 1,000 days are happening four to five times more often now.

Secondly, every recent year marks a record high of the Earth’s surface temperature. NASA warns that most of the warming occurred in the past 35 years, with 15 of the 16 warmest years on record occurring since 2001.

Last year was the first time the global average temperatures were 1 degree Celsius or more above the 1880-1899 average. This tendency will only increase the likelihood of extreme weather events happening near you. 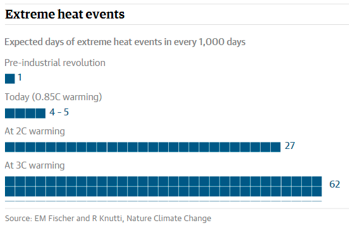 Lastly, the enterprise community is becoming more and more aware of these risks and is taking steps to become more resilient, overcoming frequent short-termism of business decision-making and embedding sustainable practices by orienting themselves to much longer term goals.

The insurance industry must adapt and work closely with communities and enterprises in order to match the needs of those parties in reducing the effects of climate change.

The moral of the story: Don’t let Berkshire’s insurance conglomerate take a bite of your hard-earned bottom line, invest in proactive protection and save on insurance premiums.

Investors Ramping Up Research and Interest in Corporate Climate Risks

Adapting to Climate Change with Intelligence

Login to adapt ready
Reset Password
Enter the username or e-mail you used in your profile. A password reset link will be sent to you by email.